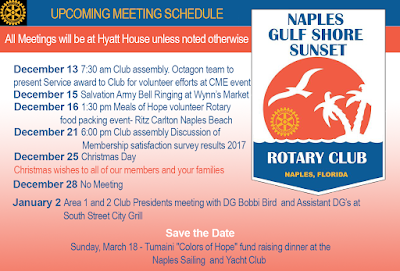 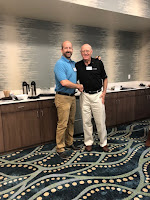 President Jim Juliano then introduced  guest speaker Adam M. Roberts, CEO of the Rotary Action Group (RAG) for Hepatitis Eradication. Adam gave a PP slide  presentation on the global efforts his organization has launched called   "Hepatitis Zero”. Since its inception in Brazil a few years  ago, inspired  by a local Rotarian who had  contracted  Hepatitis C., the program has grown significantly with the dedicated  support  of Rotary International and other key partners,  The organization is dedicated to helping test and treat hundreds  of mllions of vulnerable people around the globe for Hepatitis  A, B, and C. By partnering with Rotary ,Drug  companies, CDC and others. "Hepatits  Zero" has joined the WHO effort with global governments  to eliminate Hepatitis  by 2030.  A similar program to the Polio  Free global initiative  is ennvisioned. Adam’s presentation was timely, since Rotary’s theme for the month of December Diease and Prevention.

President Jim Juliano recognized  two club members, Jon Kukk and Robbie Selby who have achieved Paul Harris Fellow Benefactor status in recognition of of their giving to The Rotary Foundation and PHS program.  Jon Kukk was presented with his PHF +4 recognition pin, which was long overdue as he has achieved PHF+5 status  as of October 2017. Congratulations to Jon  and Robbie.

Guest Speaker Adam Roberts led the club in the four way test to conclude the meeting.
Below is the calendar schedule of upcoming events and club meetings. unless otherwise stated, all club meetings are at the Hyatt House 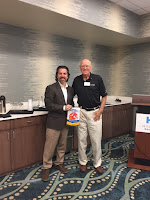