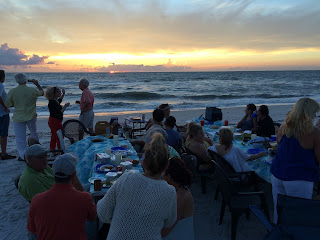 The September 30, 2015 Naples Gulf Shore Sunset Rotary meeting was called to order by President Dan Herrington followed by Invocation by member Joseph Davidow. As this was the fifth week of September our meeting was a social event. This meeting was a wonderful Naples beach dinner with all the trimmings and all enjoyed great weather and a truly beautiful sunset from our tables on the beach! A very special thank you to our member Robbie Selby for making this all happen and in an extremely positive way!! All members truly enjoyed this very special event and the great weather and sunset! Our next meeting will be October 7, 2015 at Jane's Cafe on Third Street with our guest speaker Collier County School Board Member Julie Sprague. Please also tell all your friends and associates to visit our website http://www.MercatoWineWalk.com/ and purchase tickets for our October 28, 2015 fundraiser HalloWine Walk at Mercato from 6pm to 8pm! The site has all the information you need!! 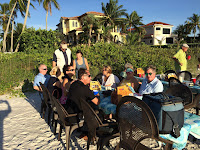 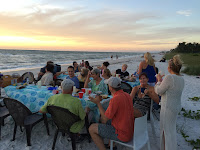 Posted by Naples Sunset Rotary Club at 10:45 AM 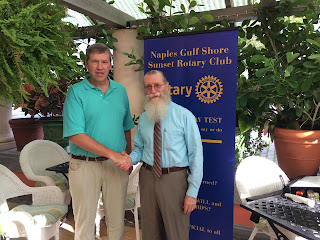 The September 23, 2015 Naples Gulf Shore Sunset Rotary Club meeting was called to order at 7:30am by President Dan Herrington followed by Invocation and the Pledge of Allegiance. Visiting Rotarians and Guests were then introduced. President Herrington said our website is live and accepting ticket orders for our upcoming October 28 HalloWine Walk at Mercato and available now to order and pay for tickets at http://www.MercatoWineWalk.com/ . President Harrington introduced our guest speaker Mark P. Strain, Chief Hearing Examiner, Collier County Government. He discussed the many happenings in Collier County planning and what the future holds. This was a very exciting and eye awakening presentation on what our future will look like both in Naples and in Collier County. Many questions were asked due to the great interest in the subject and the excellent presentation. Meeting was adjourned at 8:40am. Our next meeting will be our 5th week of September (September 30th) and will be a dinner on the beach of Naples. It will start at 6pm and continue to 8pm. Additional information will be sent to all members with specific questions and answers needed. 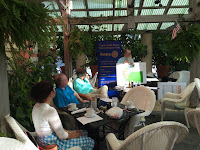 Posted by Naples Sunset Rotary Club at 9:43 AM 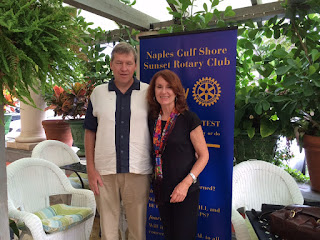 The September 16, 2015 Naples Gulf Shore Sunset Rotary meeting was called to order at 7:35am by President Dan Herrington followed by Invocation and the Pledge of Allegiance. Following introduction of guests and visiting Rotarians President Herrington briefed the club members on the latest happenings and projects including our upcoming Mercato WineWalk on October 28, 2015. He stated that tickets will be available online on September 23, 2015. Our guest speaker Penny Taylor, Collier County Commissioner, was introduced by President Herrington. Penny was elected Collier County Commissioner for District 4 in 2014. She is a ten year veteran of Naples City Council and former Vice-Mayor of Naples. She is a photo-journalist with a professional studio in Naples for over thirty years. She is a graduate of the University of South Florida. She is also a members of the Women's Republican Club of Collier County and League of Women Voters. Penny has served as a "foster" mom to over 44 "at risk" children. She discussed the latest happenings at the Collier County Commission and what the future holds. She explained in detail the many opportunities that are present now and in the future. Numerous questions by club members followed her excellent presentation. Additional information on Commissioner Penny Taylor is available by clicking here. The club was adjourned at 8:40am. The Club will be participating in a Beach Clean Up next Saturday September 19th at 8am at the beach parking area at 33rd Avenue South. Next week's meeting will be at 7:30am Wednesday September 23rd at Jane's Cafe with our guest speaker of Mark Strain, Chairman of the Collier County Planning Commission. 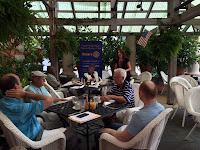 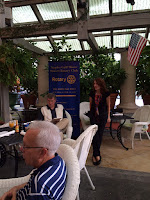 Posted by Naples Sunset Rotary Club at 9:49 AM 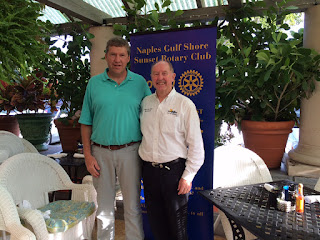 September 9, 2015 Naples Gulf shore Sunset Rotary Meeting was called to order by President Dan Herrington followed by Invocation and Pledge of Allegiance. Folowing introduction of guests and visiting Rotarians the Happy Dollar was presented. Our guest speaker was the Mayor of Naples, Florida John F. Sorey, III who discussed the many exciting past, current and future events and happenings in Naples, Florida. Mayor John F. Sorey III served on City Council from 2004 to 2012, and was elected Mayor in 2012. With an MBA from the University of Tennessee, his professional background is in manufacturing and distribution management. Mayor Sorey is currently the Executive Director of the Naples Players which is a local community theatre. He was an Army Infantry officer in Vietnam. His volunteer activities include: Chair, Coastal Advisory Committee: Member Tourist Development Council; Board Member, Harvard Club of Naples; Board Member, Community Foundation; and a Member of the Collier County Republican Party Executive Committee. Mayor Sorey is the first mayor of Naples elected to the Florida League of Mayors, Board of Directors. He first came to Naples in 1979 and moved here fulltime in 1998. Mayor Sorey has served many organizations to include: Board Member of the Naples Players, 2000-2013 and President 2001-2003; Member Planning Advisory Board, 2000-2004, and Chairman, 2003-04; Past Board Member, Friends of the Library; Past Member, Environmental Affairs Committee; Past Vice Chair, Big Cypress Basin Board, 2006-2012; Past Board Member, Naples Zoo, 2007-2013; and is a Master Gardener. He and his wife Delores have two children and twin grandsons. Many questions were asked from members after his excellent presentation and all were very excited about the bright and positive picture for Naples now and in the future. Additional information may be found by clicking here. John also mentioned the Naples Players and handed out literature for the upcoming season. The meeting was adjourned at 8:45am. The next meeting will be next Wednesday September 16th at 7:30am at Janes's Cafe on Third with our guest speaker Collier County Commissioner Penny Taylor. 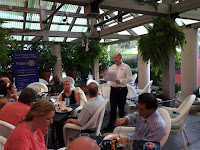 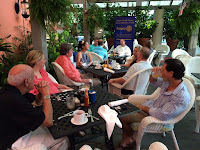 Posted by Naples Sunset Rotary Club at 9:32 AM 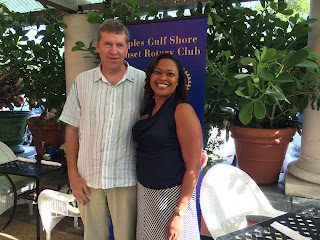 The September 2, 2015 Naples Gulf Shore Sunset Rotary Club meeting was called to order by President Dan Herrington followed by Invocation by member Joseph Davidow followed by the Pledge of Allegiance. President Herrington discussed our upcoming October 28, 2015 Mercato Wine Walk (HalloWine) to be held at the Mercato from 6Pm to 8pm. This will be the 3rd annual Mercato Wine Walk event with 17 establishments participating with reservations/tickets available online within the next few weeks at MercatoWineWalk.com . Our guest speaker Cotrenia Hood, Director of Development, Youth Haven was introduced by our President Dan Herrington. Youth Haven provides emergency shelter and counseling services to abused, neglected and abandoned children, and counseling and family support and prevention service to at-risk families. Cotrenia discussed the latest happenings and events of Youth Haven that has operated continuously for more than 42 years. Their services touch more than 2,400 children and family members annually. Youth Haven's core programs and services include: a) Emergency Shelter; b) Children and Family Counseling Center; c) Family Support and Prevention Services; and d) Homeless and Runaway Youth Program. Their mission is to protect and empower children and strengthen families in Southwest Florida through comprehensive care and community collaboration. Their vision is every child in Southwest Florida will grow up in a safe and nuturing family environment. Youth Haven is a 501(c)(3) tax-exempt organization and fully accredited by the Council on Accreditation (COA). It is a member agency of the United Way of Collier County and beneficiary of the Naples Children and Education Foundation. Additional information can be found by clicking here. Many questions were asked by members who enjoyed her presentation very much. Our next weekly meeting will be at 7:30am Wednesday September 9, 2015 at Janes's Cafe on Third with guest speaker Naples Mayor John F. Sorey, III.
Posted by Naples Sunset Rotary Club at 9:01 AM